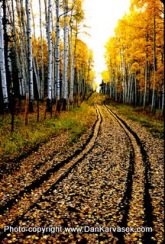 Iyar is the second month on the Hebrew calendar.  During the first month, we’ve experienced Passover, the Feast of Unleavened Bread and the Feast of Firstfruits, and are now going through the Omer Count.

Although it’s growing, there’s still a relatively small group of people observing the feasts and keeping Sabbath compared to the mainstream. We’ve chosen a narrow path.  The Feast of Unleavened Bread that has just completed is a time of distinguishing between leaven and unleavened bread, symbolizing our goal of separating sin from righteousness. The number of people eating this way for a week is pretty small. It’s likely that those currently counting the omer for 49 days is even smaller.  We’re going against the grain.  It’s what I’d call “the narrow path.”

“And a highway will be there;
it will be called the Way of Holiness;
it will be for those who walk on that Way.
The unclean will not journey on it;
wicked fools will not go about on it.
No lion will be there,
nor any ravenous beast;
they will not be found there.
But only the redeemed will walk there,”

The Righteous are Drawn Out Through the Narrow Road

Historically, here are some of the things that the Bible records for the second month or the month of Iyar:

As I thought about these events, I noticed this theme about sin and righteousness and the narrow road.  In each of these events the lawless ones and those who fell away are left behind, and the righteous remnant is drawn out to move ahead. These are those who have chosen the narrow road and are on the highway called “the Way of Holiness.”

So we see this theme in all these scenarios that took place in Iyar — the lawless ones and those who fell away are left behind, and the righteous remnant is drawn out to move ahead. These are those who have chosen the narrow road and are on “the Way of Holiness.”

That’s sobering. This is that time – the month of Iyar.

He is Still Revealing Himself to His Faithful Disciples

The road we’re on – practicing the feasts, keeping the Sabbath — it’s a narrow road, not many follow it. It’s not the mainstream. But now, after following that path through the Spring Feasts, we are brought forth ready to move ahead, going deeper and deeper with Yehovah and being used by him.

The month of Iyar ends near the end of the Omer Count.  Yeshua’s ascension took place on the 40th day of the Omer Count.  Iyar is the month in which Yeshua appeared to his disciples after his resurrection.  He revealed himself in a new way to them in this month.  Having come through the narrow path, he will reveal himself to you in a new ways this month.  Be watching and listening for his appearances in your life this month.