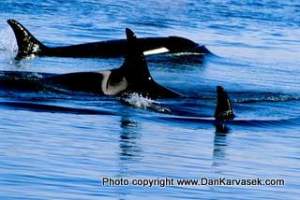 Not long ago I saw a documentary featuring the gray whale migration from Mexico to Alaska.  A mother and her new calf, born just a few months earlier, were passing off the coast of Monterey, California, when they were attacked by a pod of killer whales.  The story showed the hunting strategies of the six killer whales and the rare escape of the two grays.

Since an adult gray is far too large for a killer whale to overtake, the baby calf was the prey.  The main strategy of the killer whales was to separate the calf from its mother.  A brutal struggle went on for hours.  With the two grays becoming weaker and weaker, I couldn’t imagine how the two whales would ever rid themselves of the strong and determined predators.  END_OF_DOCUMENT_TOKEN_TO_BE_REPLACED